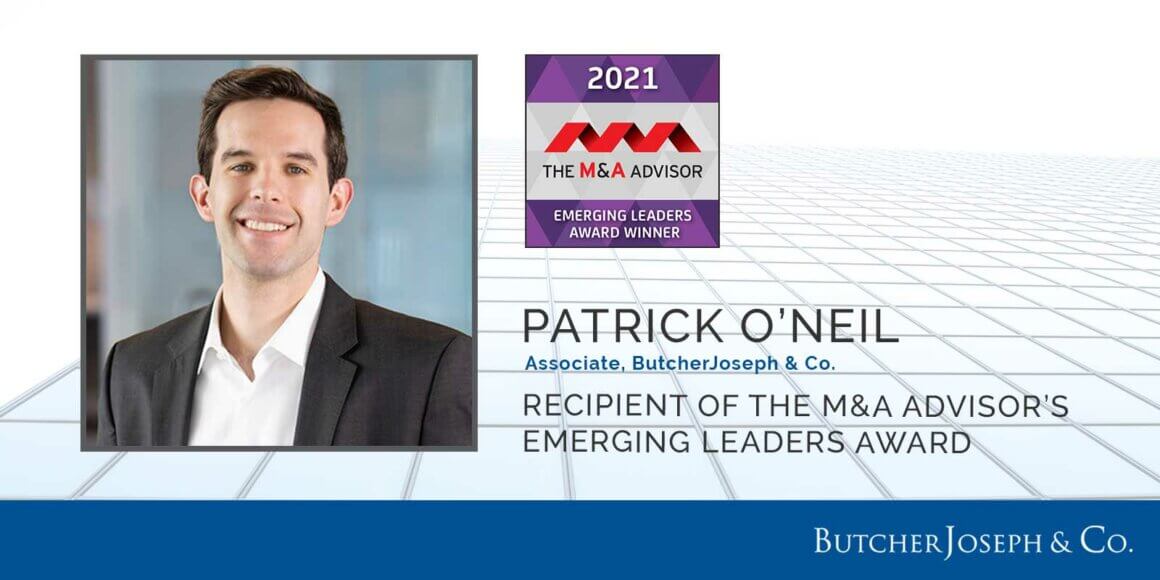 Saint Louis, MO, August 2021 – ButcherJoseph & Co. (“ButcherJoseph” or “the Firm”) would like to congratulate Patrick O’Neil, Associate, on being named a recipient of The M&A Advisor’s Emerging Leaders Awards, which honors the achievements of outstanding young professionals under 40 in the mergers and acquisitions, turnaround and financing space.

Launched in 2010 as the “40 Under 40 Awards,” The M&A Advisor created the program to honor the significant contributions of accomplished, future leaders in a robust industry of dealmakers, promote mentorship and professional development of these individuals, and celebrate their accomplishments and contributions to progress in the industry.

“As an organization, we have always believed that our awards programs stand as an oasis for inspiration and celebration of achievement. Over the past 18 months, we have witnessed notable contributions from these emerging leaders in the face of tremendous economic turmoil and uncertainty. Truly, the Emerging Leader Awardees we are honoring this year are the best and the brightest. They are the future of the M&A, finance, and turnaround industry,” said Roger Aguinaldo, Founder and CEO of The M&A Advisor.

“This marks the eighth straight year that a ButcherJoseph team member has received this prestigious recognition, which signifies the Firm’s commitment to growing and developing the most talented professionals in the M&A industry,” said Keith Butcher, Managing Partner at the Firm. “We are very proud of Patrick for being honored for his accomplishments and look forward to seeing his continued growth as one of the best, young M&A professionals in the industry.

The Awards will be presented during a Gala dinner celebration during the 2021 Future of Dealmaking Summit in New York City on Wednesday, October 20.

About The M&A Advisor
The M&A Advisor was founded in 1998 to offer insights and intelligence on M&A activities. Over the past twenty-two years, we have established the premier global network of M&A, turnaround and finance professionals. Today, we have the privilege of presenting, recognizing the achievements of, and facilitating connections between the industry’s top performers throughout the world with a comprehensive range of services.