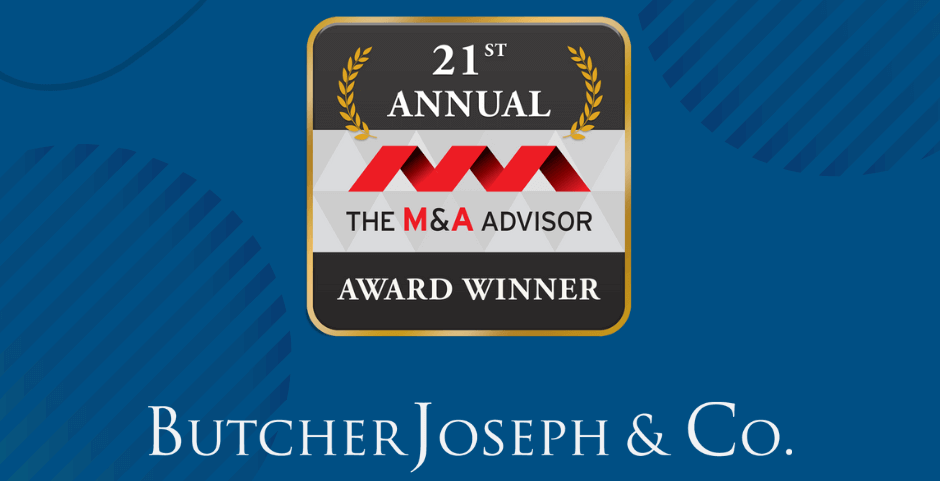 Saint Louis, MO, November 2022 – The M&A Advisor announced award winners for the 21st Annual M&A Advisor Awards.  ButcherJoseph & Co. (“ButcherJoseph” or “the Firm”) won an Industrials Deal of the Year award for serving as the exclusive sell-side advisor to Smith Transport, Inc. in its sale to Heartland Express Inc.

The M&A Advisor announced the winners of the 21st Annual M&A Advisor Awards to a sold-out and energetic black-tie gathering at The New York Athletic Club on Tuesday, November 15th, during the 2022 Future of Dealmaking Summit. Award winners were chosen by an independent panel of judges who evaluated and selected award winners from among several finalists in each category.

“The award recipients represent the best in the M&A industry this past year and earned these honors by standing out in a group of extremely impressive finalists,” said Roger Aguinaldo, founder and CEO of The M&A Advisor. “I would like to congratulate ButcherJoseph & Co. and its deal team on this prestigious award. Your transaction and firm were among hundreds of entries we received, and the judges consisted of a group of your peers in the mergers and acquisitions transaction arena.”

ButcherJoseph & Co. Managing Partner Joseph Strycharz said, “We are thrilled to be recognized by The M&A Advisor for our work leading the sale of Smith Transport to Heartland Express.  I am so proud of our team and their commitment and efforts to deliver such a fantastic result for Smith Transport and all its employees, management team, and founder, Barry Smith.”

About the M&A Advisor

Now in its 24th year, The M&A Advisor was founded in 1998 to offer insights and intelligence on mergers and acquisitions, establishing the industry’s leading media outlet. Today, the firm is recognized as the world’s premier leadership organization for mergers & acquisition, restructuring and corporate finance professionals. www.maadvisor.com.